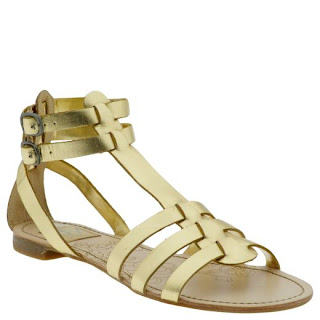 I was heartened to note that the anonymous author of the "gladiator sandal" entry at Shoeblog.com expressed the same aesthetic displeasure I have felt towards this unsavory morsel of summer footwear--even if, by the close of her posting, she does admit to eventually surrendering to the current whim. (or not-so-current. According to her, they've been popular for a few seasons now. Perhaps I have been in a blackout these last few summers)

Any savvy young woman can tell you that the right summer footwear is more important than red blood cells. But the wrong summer footwear is akin to the HIV virus. In my opinion, gladiator sandals are discolored lesions on the cheeks of the female foot. Though the Shoeblog.com author does not go as viciously far as I do, her initial assessment of the style is nevertheless apt. As she poignantly observes:

"I stayed away from gladiators because they tend to 'cut' the foot from your leg, often with bulky plates and multiple ankle straps, and disrupt the natural lines and the illusion of 'elongated' that I so direly need to create."

But this is nothing compared to the damage wrought by the "bulky plates". The most problematic of these being the one at the heel. Has there ever been anything less feminine in the whole of fashion history, excepting the asexual "Peppermint Patty" Birkenstock? If the gladiator's ankle straps represent a disruption of continuity, the unsightly heel plate represents a complete disregard for the male libido; or perhaps an utter self-loathing among women for the innate power of the well-shaped female leg.

Recently I have wondered--after a frustrating commute on the subway or a flaccid perambulation around the East Village--if the diabolical minds responsible for the Burning Man Arts Festival were not also behind the reintroduction of the gladiator sandal for the modern female. Dissatisfied with the sacrilege to the sanctity of smooth, silky calves brought about by weeks of not shaving, perhaps those most contemptuous of good taste would go one step further in presenting grotesque stumps to an expectant viewing public! Such an abhorrence any cultured society cannot stand for long.

If the need to sever foot from leg is so great, why go for a sandal at all? Why not opt for a less ambiguous Ked, Converse, or (if punk be your spirit) Dr. Martin? Moreover, to greater exemplify femininity, why not indulge in the pastoral lyricism of a ballet flat or the tried-and-true Mary Jane? Any of these options would be a thousand times more preferable to the strange nether-region between sandal and low-top boot evoked by these new gladiators.

This unintentional masculinity is only exacerbated by switching the color. Consider this selection from MIA's Rome series in which "basic black" goes beyond mere wardrobe staple into downright morbid: 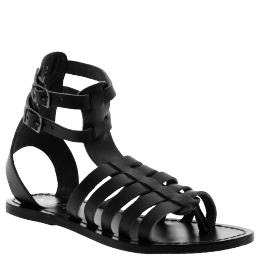 Some feminists might argue that it is not necessarily the sole responsibility of female footwear to contribute to the sexual excitement of males. Yet even as a symbol of empowerment, the gladiator sandal fails miserably. Were this not the case, then how is it that the Shoeblog.com author, who initially admits to an uneasy apprehension with the gladiators that at times seems to border on outright disgust, could pathetically write near the close of her entry:

"I think I’ve reached the critical point in time when I’ve got to get into a pair of gladiator sandals, or my life won’t be complete."

Such an easy, unquestioning surrender is unbecoming not only for an empowered female, but a gladiator as well.

As we find ourselves in the dog days of summer, with temperatures skyrocketing faster than gasoline prices, the need to balance comfort and beauty in our nation has never been more profound. In most parts of the country, at this time of the year, sandals are the only logical choice. But the gladiator only half-delivers on the comfort/beauty ratio. Comfortable though many females may find them, beauty is still left wanting. To strike the perfect balance, consider the understated elegance of Lily Pulitzer's Romancing The Stone sandal. 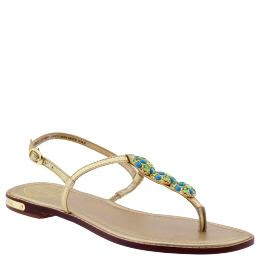 A bit pricier than the gladiators, but is $228 really that expensive when it comes to the preservation of leg and foot continuity?