When I think of all my sins in their magnitude, it embarrasses me to admit. . .

You see, I believe if I can improvise a trajectory around them without having to actually touch them--no matter how physically-convoluted that trajectory may be--there's nothing to be excused.

First off, saying "excuse me" can be quite socially draining when all I really want to do is just get past the person and continue on with the rest of my life. Why should I have to start a new relationship with a total stranger just to imply that I don't want to be near them? I'd rather not open that can of worms. It's much more convenient to circumvent their bodies awkwardly, come really close to falling into them, and then surprise them (and myself!) by remaining upright.

For instance, consider this large black lady on her cell phone at the pizzeria today. There couldn't have been more than a single foot of room on either side of her between the counter and a large vinyl booth near the exit. Once I was handed my slice of Canadian bacon, Italian sausage, and anchovies, the only two ways out of the restaurant, as I saw it, were to either say "excuse me" or squish myself together as tightly as I could and hold my pizza box far above my head, sliding ten to fifteen baby steps in the narrow strip of floor left over by her enormous posterior.

I opted for the latter.

Twice I stumbled and almost fell into her. Once, after banging my knee against the Formica table and then again, when I attempted to turn myself around prematurely in the erroneous assumption that I'd already traversed the width of her waistline. Sadly, there were still a few more inches to go before I could safely say to myself: "Olly-Olly-Oxen Free!"

Eventually, I extricated myself from this daredevil position. Yet I only had a brief second or two in which to congratulate myself on the completion of yet another physically difficult, almost Chaplinesque, circumlocution of a human form without having to say "excuse me"--when suddenly I noticed a look on the black woman's face that could have killed a white boy.

"Don't you say excuse me?" she huffed.

"I didn't want to hurt your feelings," I returned.

That was a glib response, to be sure. However, by the time I arrived home with my warm slice of pizza--who knows how cold it might have been if I had taken precious time to stop and say "excuse me"--I realized that I had been right after all.

That is to say: what is the purpose of saying "excuse me" to somebody that's in my way? I'm the one that has to perform the over-the-top acrobatics if I don't take the time to say it.

Aren't I the one that's doing them a great favor--a social good, if you will--by not calling undue attention to the fact that they're preventing my egress?

This afternoon, as I stuffed myself with salty bits of anchovy on tomato paste, I realized once and for all what a truly kind person I am. Not many people in today's fast-paced and computerized society would take the time, as I do, to both not touch someone and not make manifest the painful truth that they're placing limitations on my Constitutional guarantee of free travel.

Say what you will, but at least I care enough about my fellow human being to consciously and courteously refrain from uttering two of the most hateful and hurtful words that the diabolical lexicon of modern man has ever contained:

Excuse me
Posted by Will Franken at 9:53 PM

Why Can't Women Think Of Me As A Brain In A Jar of Formaldehyde?


It's so disappointing to me that every time I meet a woman, she's always raving about how cool it is that I'm a man with a male mind and a male body complete with male genitalia.

Why can't women look beyond my physical appearance and treat me like an asexual, disembodied brain doused in a jar of formaldehyde?

Do you have any idea how boring I find it when women express a desire to have sex with me? As if I were a human male?

Is it too much to ask to be treated like lumpy gray matter in a petri dish? Why can't I find a nice lady to poke me with a stick and ask me to form a theory about her ongoing relationships with men of lesser intelligence?

Why must I always be sought out by the fairer sex for orgasms instead of advice?

Just for once, I would like to be treated with the same dignity and respect as a magic eight-ball. I, too, am perfectly capable of being shaken up by women to generate random predictions on romantic and vocational aspirations that don't concern me in the slightest.

How can it be, night after night, that every sexual contact I have with a woman is always direct and never vicarious?

Isn't there one single woman in this godforsaken world of casual encounters who's willing to look beyond my male physique and accompanying heterosexual appetite to see the electrodes attached to my cerebellum?

I suppose I wouldn't mind sating my carnal desires as much if women would only return the favor every now and then by using me as a convenient social mirror to help alleviate any uncertainty they might have about their own intelligence.

Oh, what I wouldn't give to be the guy who finishes every polysyllabic word they start but can only remember the first syllable to--instead of the pathetic schmuck in their beds the following morning, eating scrambled eggs and drinking black coffee!

I want to be the guy they should go to bed with, but don't. I want to be a genderless idealization instead of a male actuality.

I swear, if I see another hot young lady this week sitting on my lap in her bra and panties, I'm going to throw up. I'm still young -- I have yet to experience all the wondrous adventures of being a neutered Facebook acquaintance to an uploaded photo of a good-looking girl nestled in the arms of her hipster boyfriend!

The repetition is killing me. Every night it's the same thing. Meet a good-looking girl (yawn) make out with her (yawn) get an erection (yawn) go back to her place and get undressed (yawn) and then fuck her so brutally that every framed family photo and Japanese lithograph in her apartment falls to the floor and shatters, while the unrelenting and hellish banging of the headboard against the wall continues unabated for upwards of three hours until an earth-shattering, cosmos-dividing, mutual orgasm at last provides the concupiscent punctuation mark that concludes the run-on sentence of our sexual satisfaction and enables us to finally disengage our glistening bodies one from the other in order that we may roll over and light up some well-deserved Marlboro Reds--despite an earlier admonition by her that "smoking is not allowed in the house."

I'm sorry, ladies, but I was not given a penis for the sole purpose of sticking it inside hungry vaginas night after bleeding night. As pleasing as these casual insertions have been for many of you over the years, I'm afraid this cock of mine is endowed with far more nobler functions. For example, if you had taken the time to ask before rudely demanding that I tear off your underwear and "shove it in as deep as it can go", I might have drawn your attention to the sheer biological brilliance which allows my "it"--as you say--to serve me diligently both in the arenas of micturition and onanism.

(That is, of course, during those extremely rare moments when I'm actually in a position to either urinate or masturbate--seeing as how my penis is almost invariably lost inside some tightly-clenched vagina!)

Far exceeding in importance these aforementioned additional qualities of my cock, however, is a function both necessary to my growth as a polite and unassuming Ken doll and one that I hope will be encouraged through the kindness of a very special lady with the courage and insight to see in me not a mere mortal man with common carnal desires, but an ethereal entity existing outside of space and time--namely, its ability to lie limp and unused while she prattles on about what a "brain" I am.

I suppose I shouldn't complain, though. After all, none of the above is true.

I am the guy who wrote the essay at the end of The Breakfast Club. 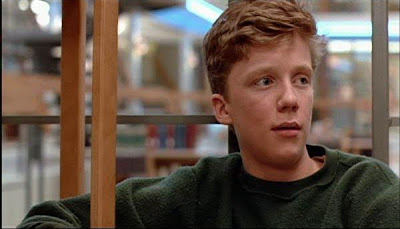