May I Have My Balls Back, Please?

If you're in the mood to be culturally castrated on this, the six-year anniversary of 9-11, pick up a copy of today's San Francisco Chronicle and you'll see a nifty front-page story by Julian Guthrie: "For some on anniversary, it's time to move on."

It's oh-so-wearying out here in San Francisco where everybody is vehemently anti-radical Islam and won't shut up about the horrors of 9-11.

Give me a fucking break. What exactly should we "move on" from? Seems like San Francisco "moved on" quite some time ago. Hell, everybody I meet here thinks that George Bush orchestrated 9-11 anyway. If that isn't "moving on", I don't know what the fuck is. They've "moved on" from sanity to insanity, practicality to utopianism, a hint of dignity and self-worth to communal groveling and self-abasement.

Here's how you start a non-story like this: "There will be the long recitation of the names of the dead, the moments of silence, the images of planes hitting the World Trade Center. . ."

My lord. Sounds almost as tragic as 9-11 itself. Whatever shall we do? Let's take some expensive anti-depressants, do some yoga, and read on:

"The global goodwill that America engendered after Sept. 11 has been tarnished by wars in Afghanistan and Iraq. The American flags that were ubiquitous after the terrorist attacks have been put away. America is at war. Osama bin Laden, who released a video message Friday for the first time in three years, remains at large."

First, I'm not sure that you could call it a "global goodwill" that America engendered after 9-11--unless you're willing to subtract celebrating Palestinians and Lebanese from the global community. 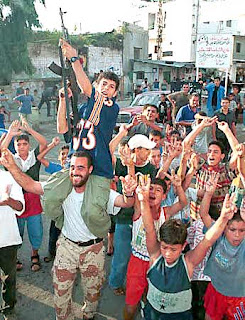 And no, I don't need to "understand" the people in this photo. They are baboons. I don't care how they got that way. You see the man with the child on his back holding an AK-47? We didn't make that happen. And if you think we did. . .well, you're a baboon also.

Sure, countries whose citizens have largely progressed beyond barbarism reached out to America. But I'll let you in on a little secret about radical Islam: It's always fucking hated us, you dizzy cunt. But then again, if your history is only 6 years old, you can pretty much make it up on the spot.

And if Osama bin Laden is still at large--well, I guess the practical thing to do would be to find the fucker and kill him. And then, after we publicly hang him and gut him like the pig that he won't eat, that would be a convenient time to "move on".

But then again, most folks around here have already "moved on". Or they never "move" at all. They just kind of sit around and when the time comes--like the six-year anniversary of 9-11--they roll over and take it up the ass at knife point in articles that observe:

"There are also many who have Sept. 11 fatigue and see it as a good time to 'turn the page'."

September 11th fatigue? Is that the same thing that the soldiers in Iraq and Afghanistan are suffering from? Or is this yet another fucking instance where worthless cowards are working overtime to put themselves on the same spectrum of courage as real heroes?

Gee, I can't really sit around and badmouth the soldiers or trivialize the impact of 9-11 if I'm writing all this in an air-conditioned office here in the sanctuary of the West. I think I'll make up a disease and give it to myself.

Oh, mommy, I can't go to the memorial today! I think I'm coming down with September 11th fatigue!

Fuck this. I'm taking the word "liberal" back. I'm reclaiming it. These guys aren't liberal anymore. I'm a liberal. In order to be a liberal, you have to believe in something. And the continued negation of the truth doesn't count. And the truth is there is no such thing as September 11th fatigue. And if there is, it's just latent guilt for recognizing one's own moral inferiority.

And who exactly is saying "turn the page"? Well, how about Charles Figley, a psychologist and director of the Traumatology Institute at Florida State University? 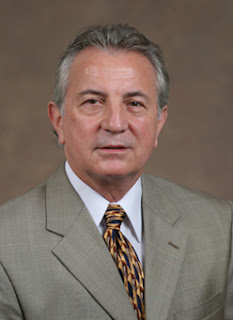 Interesting that a San Francisco Chronicle staff writer felt the need to go all the way to the other coast for the following drivel:

"People tend to need memorials and anniversaries if they have not fully 'worked through' the experience. . .I think when people attend these memorials or tune in or read about it, there is a hope that by doing so it will make things better."

That's not why I need memorials and anniversaries. I didn't know anybody who died on 9-11. It wasn't personally traumatic to me. No, I need memorials and anniversaries because I need something to believe in besides dickheads like Charles fucking Figley. Give me a flag and the concept of nation (for better or worse) over the likes of Charles fucking Figley anyday.

What are you saying, Charles Figley? That I'm not "healthy" if I go attend a memorial? That if I want to be a "balanced person", I should subscribe to your bullshit academic cynicism? Fuck you, Charles Figley and the cunt that gave you space in the paper.

Whatever happened to the days when the hippie radicals were going to rise up against the bourgeois pigs? Because that's exactly what Charles fucking Figley is. A highly-paid bullshit artist who makes his living telling you that everything you believed in was wrong.

He goes on: "People should not be ashamed of not having a need to remember or participate in a memorial. . .It's natural that other things come up, that people have something new that is of greater immediate concern. That's the way life is."

That's why they won't rise up against the likes of Charles Figley. He's telling them exactly what they want to hear. It's ideal. You don't have to do anything, you don't have to believe in anything, you don't have to sacrifice anything. Charles fucking Figley will absolve you of all guilt. Go ahead and spend, shop, and vegetate. . .it's not your fault if you don't care. Charles fucking Figley doesn't care. And look at him--he's the director of the Traumatology Institute at Florida State University! You remember trauma, don't you? War veterans used to get that. Now it's for everybody. Everybody has trauma. And it's allllll equally important.

Even those who suffer from "September 11th fatigue".

Let's give more money to Charles fucking Figley. He'll make you feel unashamed for being a worthless, spineless, culturally-flatlined slab of nothingness. Give your brains to him as well. He'll do the thinking for you. He'll skull-fuck you so hard you'll be convinced that every belief system you were raised with is a symptom of a deeper pathology. Finally, give him your beliefs, passions and courage--he'll show you that your morality is immorality and then supply the new morals to fill the void: inaction, complacency, and smugness.

Oh, and Charles Figley? Why don't you go global with your message and get on a fucking plane to Iran, Iraq or Afghanistan and tell some of these radical Islamist groups that people shouldn't have to "feel ashamed" for not bowing down in prayer five times a day, not converting to Islam, or not strapping explosives to their children?

Because you're a decadent overpaid cunt, that's why. You're nothing but a fucking businessman in the end, Charles Figley. A corporate pig who's going to say the safest things involving the least risk for the most profit. Let's wise up, everybody, and connect the fucking dots.