Good on you, Bollinger, good on you!

When I heard the news that Ahmadinejad was invited to speak at Columbia University, I just assumed it was another exercise in the multicultural interfaith-dialogue horseshit that pawns itself off as higher education in the postmodern world of relativism.

Imagine my surprise when I discovered that the very guy that invited him to speak, university president Lee Bollinger, took the opportunity that he helped orchestrate to pin the slimy fucker to the mat.

Good on you, Bollinger, good on you!

I feel terribly optimistic today, for I find myself re-examining the motives for the invitation in the first place. I now imagine Bollinger being surrounded daily by spoiled college students and overpaid faculty members convinced that a) 9-11 had nothing to do with Islam, b) Americans live in a police state, and c) George Bush is the single greatest threat to worldwide freedom.

Perhaps Bollinger knew the truth behind this seemingly impenetrable layer of academic bullshit. Perhaps he knew the most efficient way to expose it to a brainwashed student body was to invite a real dictator to speak and then fire relentless hardballs on the topics of human rights and Holocaust denial. Regardless of his motive, Bollinger did the job that "60 Minutes" couldn't do--ask meaningful questions of a dark-age baboon who will quite likely obtain access to a nuclear weapon within the next few years unless we can take off our diapers and act like adults once more.

Even today's Chronicle had very few kind words left for Ahmadinejad after the bout with Bollinger in which the president of Iran claimed, among other nonsense, that there were no homosexuals in Iran (failing to mention this statistic may be true only because he had them all killed). I predict more and more people will flip in the coming months; the absurdist illusion of not being able to "tell the difference" between Bush and Ahmadinejad will be exposed as sheer cowardice masquerading as free speech.

Yes. I am optimistic today. I predict a slow awakening, a necessary migration out of relativism and into truth. Soon we will rediscover the cultural building blocks of "better" and "worse". Western self-flagellation might very well cease in the near future as continued criticism of America will come to be regarded as passe. Suddenly there will be another legitimate enemy in our sights.

We couldn't see him before because we weren't getting the news. We were getting speculation. We weren't sure who the "real enemy" was.

Here he is again: 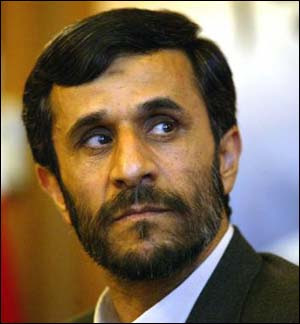 Good on you, Bollinger, good on you!
Posted by Will Franken at 2:57 PM