Birthday Bash at the Barrel

(note: there's still time to sign up to be a donor/sponsor for Will Franken Team Montreal '09 ((see blog entry after this one)))

Well, yesterday has come and gone, but the memories shall remain etched in my memory forever!

As Chuck E. Cheese's is to children’s and pedophiles’ birthdays, Cracker Barrel is to single adult male birthdays! (If there isn't a Hooters nearby)

Knowing in advance that I would turn 36 yesterday, I scheduled an appointment nearly seven months ago with the voluptuous vixens at Cracker Barrel for the full-on birthday treatment. A sultry-voiced madam on the other end penciled in the reservation (in what I can only imagine was a cum-stained, leather-bound roster of clientele including such New York political luminaries as Eliot Gould-Spitzer and Screamin' J. Austen).

At last, the big day was finally here!

Upon arrival, I was led through the sleazy aisles of a New Orleans cathouse-themed gift shop which peddled sexual wares under such innocuous-sounding names as Precious Moments Angel Figurine #872 and The Best of LeAnn Rimes. By the time I arrived at the hostess station, I had an erection the size of my penis!

"How many?" asked the hostess, licking her lip gloss from her lips and then back on with an invisible hands-free applicator. She did this seven, maybe eight times. But no more than nine. That would have been too slutty--even for Cracker Barrel.

"T-t-t-two!" said my friend and I in unison, stuttering the T's at exactly the three same moments in an auditory symbiosis which might lead some cynics to conjecture that we were really only one person after all. Not so. After all, what good is a birthday without at least one friend who isn’t oneself to celebrate it with oneself?

“Come this way,” sizzled our hot hostess in the dark brown apron bearing the insignia of the old man sitting next to a butter churn.

My friend and I turned to high-five each other. “This is going to be the greatest 13th Tuesday in Ordinary Time and optional memorial of the First Holy Martyrs of the Holy Roman Church of our lives!” whispered my friend.

“Oh, I forgot.” he said before accusing me of heresy.

As a formality, we were handed menus. But nobody goes to Cracker Barrel for the menu. Cracker Barrel is all about the happy ending (if you know what I mean).

But before you can have an ending, you’ve gotta have a beginning. MEOW!

And, boy, did things really begin when Bernadette arrived!

“What are you talking about, you creep?” she huffed, making a beeline for the manager’s office.

She stopped in her tracks and returned to the table with a knowing smile. “Oh. . .so you’re the birthday boy? Yes, I’m your mistress. I’ll be your mistress all night, birthday boy.” She set down her serving tray, hiked up her coffee-brown slacks and pushed aside her apron, making as if she were going to straddle me like the well-hung pony I play on Broadway. Suddenly, she spied my friend and shot him a sour look. “Who’s he?”

“That’s Steve. He’s my friend. He just wants to watch.”

She sighed. “Whatever. It’s your birthday.”

After a few more small-talk pleasantries, Bernadette bound and gagged me and went to great lengths humiliating me in front of the numerous grandparents who, either out of senility or perversity, get their wrinkled kicks by exposing their grandchildren to such houses of ill-repute as Cracker Barrel. Why can't these freaks find a family restaurant?

I was sizzling like a steak, bubbling like a fondue, marinating in juices that were anything but orange. Once she determined I was ripe and ready, Bernadette left, only to return minutes later with a chicken and dumplings platter, complete with breaded fried okra, hashbrown casserole, and macaroni and cheese!

She removed my gag and loosened my bonds. Then she promised me that if I was a good little slut and ate all of my food, she'd give me a birthday surprise.

And what a surprise it was!

When the double-swinging doors swung open again, there was Bernadette with three of her hot little friends, all wearing the same kinky outfit consisting of a brown apron, blue button-up shirt, and brown slacks!

They were singing the sexiest little ditty I had ever heard. Something about having a happy something or other. I don't really remember. I was too flushed at the time to even remember my name!

After the song, Mistress Bernadette set a bowl of strawberry shortcake in front of me.

"Ooh," I sighed, "Is this strawberry shortcake?"

"Sure is, you little bitch," said Mistress Bernadette. Then Bernadette and her three friends; Laura, Leah, and Christine, forced me to sing the jingle from the Strawberry Shortcake doll TV commercial before they would allow me to take a bite. I couldn't remember all the lyrics, so I faked it as best as I could:

"Strawberry shortcake, apple-berry, too!
Happy happy doll in a land of fairy goo!
Strawberry Shortcake, nine ninety-five!
Kiss her on the lips and she will be alive!"

The girls smiled and said that my rendition was good enough.

When I had finished my shortcake, Bernadette demanded payment or she was going to stick a fork in my balls. My friend and I left some cash on the table and then slipped out the back door, trying to avoid the paparazzi.

I know some people think it's creepy to pay money for a meal. But until last night, I had never done it before. I always prided myself on being attractive enough to eat for free.

I guess I just wanted to talk a walk on the wild side. And besides, I'm 36 now! 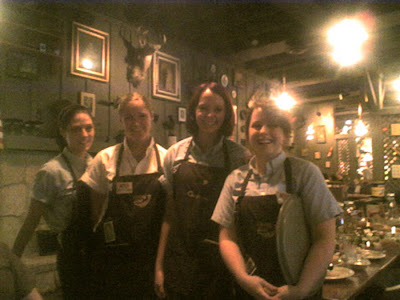 Hot night at the Barrel: From left to right; Laura, Leah, Christine, and Mistress Bernadette!
Posted by Will Franken at 2:03 PM