One of the most magical things about Facebook (among oh so many) is that people you haven't seen for years post photos of yourself from your younger days. It's funny, I have so few photos of myself that aren't performance or marketing-related. Anyway, here are some that I was surprised to see after all this time: 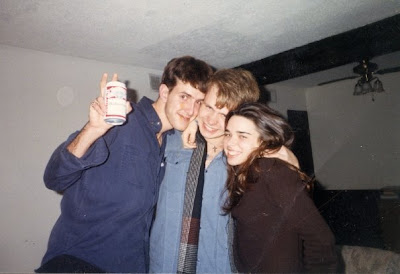 I was seventeen or eighteen when this one was taken. This is me with my friends Phil and Robin. I shouldn't call Robin a friend. I had a major fucking crush on her. I loved that chick sooooo much and I always thought we would have made a perfect match. She was such a bitch to her mother every time I'd come over, that it would turn me on. "Shut the fuck up, mom!" she'd say, as if she was embarrassed at the thought of even having a mother. Much like me, I suppose. Unfortunately, nothing ever happened between me and her. She was just as afraid of real intimacy as I was and, what's worse, she was always trying to be funny with me. Big mistake. I'll tell the jokes. You laugh and go to bed with me. She used to always do an impression of a gay man, however, which I did find somewhat funny. Why not just speak in a girl's voice?

I guess we were young back then and prone to do stupid things. But Robin dated a deadhead named Nathan for awhile, which was silly because, like me, she was so anti-hippie. (Another major turn-on) Even though I was anti-hippie also, I could be quite sentimental. Not so with Robin. I could always count on her for some wry cynicism. And although I was equally cynical, I still cried during It's A Wonderful Life. Something that Robin could never understand.

I got a phone call from her out of the blue last year and we talked for a good while. She's lived in Maryland for some time, works in a library. Never married. Too bad. She had her chance with me. I would have gotten a job on an oil rig back in the day to support a sweet little woman like her.

But she wasn't sweet. She was nasty, cynical, and depressed. That's why I was so sweet on her.

Remember the scene in It's A Wonderful Life when Clarence is showing Jimmy Stewart what would have happened if he'd never been born and Jimmy Stewart demands to know whatever happened to Mary (Donna Reed) and Clarence says, "You're not going to like it, George. She's an old maid" and then Jimmy Stewart goes to the library to meet Mary as she gets off work?

Well, I never understood why Clarence said that Jimmy Stewart wasn't going to like the fact that his wife would have been an old maid if he'd never been born. That would have made me happy. If I would have never been born and I found out that my wife married somebody else in that alternate universe, I'd kill her as soon as Clarence brought me back to real life. You fucking bitch! Why'd you marry that dickhead when I wasn't born? 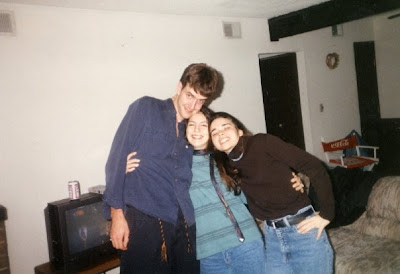 Now this is a tasty sandwich.

The girl in the middle is Sharon. I had an even bigger crush on her. I was so sweet on her, it bordered on insanity. Notice that Robin and Sharon have a few things in common: they're both sexy, short, and brunette. But there's where the similarities end.

As Robin was to cynicism and nastiness, Sharon was to lightness and optimism. I always loved it when the two of them were together; it was like a Ying-Yang with four breasts.

For Sharon, I would have worked two jobs on an oil rig and taken night classes to become a certified plumber to win even just one of her hands in marriage!

After awhile, though, I got tired of pretending to be somebody I wasn't. With Robin, I didn't have to try as hard. Robin and I used to tell racist jokes to each other. Robin's mouth was just as filthy as mine: "nigger", "spic", "kike", "faggot", "cunt"--there was nothing the two of us wouldn't say. I think Robin was a lot like me in that she actually got off on being inappropriate. We were politically incorrect years before politically incorrect became cool. I give Robin extra credit for being that as a female.

In the context of mine and Robin's carefree banter, sometimes Sharon could be a bit of a wet blanket. "Come on, guys," she'd say, "that's not cool."

If Robin was around, I'd get defensive. "Jesus, Sharon, whatever happened to freedom of speech? Just try it. Say 'nigger'. It's just a word. What are you afraid of? Everybody's doing it!"

But if it was just me and Sharon--well, that was a different story entirely. I'd pop on that mask of the gentle and caring young man with flowers in his heart and I was ready to go to town: "Man, Sharon, when is all this fighting going to end?"

"The, uh, you know, the fighting in the world. It's crazy. All the fighting. It needs to end. And now."

But too much gentleness and pretending was putting me on the fast track to becoming a gay best friend to Sharon. After the fall of Soviet Russia, Sharon and I drove up to Fulton, Missouri to see Gorbachev give a speech at the university. I had planned on fucking her that day, but it's hard to shift from glasnost to condoms in one afternoon.

Over time, Sharon effectively annoyed me so much with her peace-loving naivety that I began to lose interest. One time she showed up to a party with this scraggly, unwashed, sixty-year old bum and, with her pretty smile of innocence, introduced him to everyone as "Bob Seger".

"His name is Bob Seger?" I whispered to her.

"That's what he said his name was," she said defensively, "Why should I doubt him?"

"Because he's a bum and Bob Seger wrote 'Hollywood Nights'."

"Oh yeah," she rolled her eyes, "Like there's only one Bob Seger in the whole world."

"Where did you find him, Sharon?"

The man who called himself Bob Seger began a drunken air-guitar solo in the background and screamed at the top of his raspy lungs, "I'm motherfuckin' Bob Seger!"

Oblivious to the man's antics, Sharon attempted to explain, "He was waiting outside of the Quick-Trip. He asked me what I was doing and I said I was going to meet some friends. . ."

"And he wanted some help getting inside his house because he's afraid the ghosts that live there locked the doors again."

"Jesus, Sharon," I sighed. Then, because I still loved her, I stood up to help Sharon walk "Bob Seger" to his house.

Sharon put her lily-white hand on the man's flannel-covered shoulder, "It's okay, Bob. He's just going to help me get you to your house so we can protect you from the ghosts."

Sharon looked in vain for a hint of sympathy on my face as she shrugged her shoulders, "I guess I should go alone. He only feels safe around me."

God, I thought, why am I so in love with this girl? "Okay, Sharon, that's enough," I said, walking past her to the bum, "Listen, Bob, I'm a big fan of your music and everything. But here's the deal. Either the two of us go with you or you go alone. The girl is not going with you by herself. Understand?"

He took the hint and he went off down the road.

Sharon eventually did get married to my friend Jeff. I didn't mind. I had left Missouri years before their wedding and was pleased to discover that there were plenty of other women to obsess about all over this great nation. Sharon and Jeff live in Kansas City. I drove out there to see them a few years ago, but Jeff threw me out of the house after we got into a political argument which ended with him accusing me of cheating on a Scrabble game earlier in the day. I didn't.

So to sum up: I wanted to marry Sharon. And I also wanted to marry Robin. Robin would have been a better match, but I would have only been able to cry during It's A Wonderful Life with Sharon. At any rate, I am a richer man for having married neither.

One of these days, I'll tell you guys about Sabrina and Nancy. If somebody happens to have any pictures of me with them. I actually proposed to both of those girls and--would you believe it?-- they both said yes (not at the same time, of course).

Oh, but I got cold feet. What was it about the word "yes" that scared me? Even when I asked for it?