The Funniest Thing I Have Ever Seen In A Newspaper, Including "The Onion"

As somebody who once taught (or attempted to) in the toilet that is the New York City public school system and was strong-armed into joining the standard-lowering, money-grifting, anti-education union known as the United Federation of Teachers, this was especially priceless.

From the "Letters" section of Friday's NY Post (paying particular attention to the Editor's Note):

I have been a teacher in the New York City school system for over twenty years. For all of that time, I have also been a very proud member of the UFT.

Over the last several years, there have often appeared very negative comments presented in your editorials about the quality of New York City teachers.

You have frequently alluded to the fact that many or most teachers cannot spell correctly.

I would personally like to correct your front-page headline "Isiah Getting Just Deserts" (Oct. 27).

Deserts are arid regions. I think you meant to say the word "dessert."

I would like to think this was just a typo. However, perhaps whoever wrote this headline was not fortunate enough to attend school in New York City.

EDITOR'S NOTE: The American Heritage Dictionary, 4th Edition, defines "desert," as: n., something that is deserved or merited, especially a punishment. Often used in the plural. 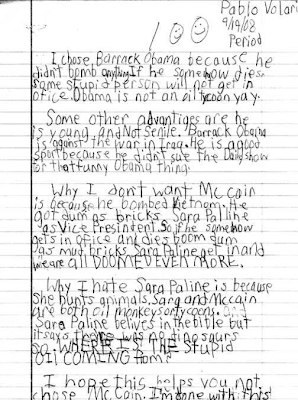