The Crusade Of The Knight 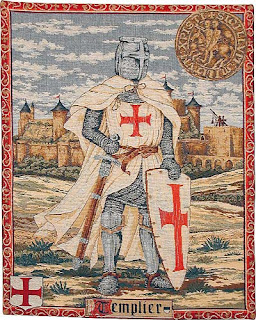 “Well,” she sighed, “I just don’t think it’s fair for you to poke fun at Islam.”

“But that’s what I don’t get,” he replied, “You’re saying it’s not fair to poke fun at Islam, so basically you’ve just made a value judgment about a single religion. You’ve decreed that Islam is off-limits to criticism. That’s a value judgment. And according to you, I should alter my current value judgment to fit your value judgment. Let me ask you--is that fair? I thought you didn’t believe in objective truth. So why are you trying to impose your opinion onto mine if everything is truly subjective? Can’t I have the choice of wanting to make fun of Islam or do I have to accept your understanding of Islam as something that can’t be ridiculed?”

“I just don’t think you know enough about it.”

“Have you read the Koran?”

“No. But I would argue that there’s probably just as much bad stuff in the Bible.”

“Have you read the Bible?”

“By the way, if you haven’t read the Koran, how do you know there’s bad stuff in there?”

She stood upright for a brief second, “Hey! My mother was a lump of clay!”

“I’m sorry," he stroked her tear-stained cheek, "You see, the reason I do what I do is simple. Ever since I was a little child, I’ve always loved European culture, European history, European art, European music. In particular, I was obsessed with Britain--it’s literary--especially satiric--tradition: Alexander Pope, P.G. Wodehouse, Monty Python. I used to fantasize that one day I’d be allowed to become a subject of Her Majesty’s queendom and, who knows, perhaps be knighted for some unspecified heroic deed. To this day, I get chills when I hear a Winston Churchill speech or the Royal Scots Dragoon Guards' bagpipes playing “Amazing Grace” or side two of Abbey Road. I went to London for the first time this last February and attended a Sunday morning C of E service at the Church of the Royal Air Force at St. Clement-Danes and was surrounded on all sides by those very same men that Churchill spoke of when he said “never in the field of human conflict was so much owed by so many to so few”. And the following Monday evening at Westminster Abbey, before the glorious Evensong began, the vicar offered up a prayer to 'all the victims of terrorism worldwide'. . ."

He paused to light a cigar and take a sip of brandy.

Then he continued, “. . .And with that prayer, there it was. I heard it loud and clear in the Abbey: It was the sound of moral clarity. Because, you see, I know what a terrorist is. A terrorist is somebody who gets angry because they don’t get their way and they blow up beautiful shit--like statues of the Buddha in Afghanistan. . .”

“Well,” she sneered, “Radical Buddhism is just as bad as radical Islam.”

“Why in God’s name are we never allowed to focus on any one thing anymore? What’s with all the qualifiers? You never offered qualifications when I used to complain about America and Jesus.”

“Because I’m scared Islam’s going to hear me.”

“All right,” he patted the bed, “get under the covers.”

She did as she was told.

“You see, my dear,” he said as he adjusted his RAF-issued cufflinks “I was born and raised in Missouri. But I dreamed about Britain. And now that I live in San Francisco, I dream of Missouri--because at least there I was allowed to dream about Britain. Here, I have to feel guilty for dreaming about Britain, dreaming about preserving Britain, dreaming about preserving Britain’s identity as a nation, as a place in history, as a mover and shaker in the building of Western Civilization. Because when religious bigot assholes arrive in droves across the English Channel from shitty third-world countries and start to preach to thousands in Hyde Park about uniting the grand 'ummah' to 're-establish the Islamic caliphate across Europe' by 'beheading those who insult Islam' all the while receiving state assistance as culturally-suicidal MPs and space-cadets like London Mayor Ken Livingstone mouth empty platitudes about a 'new, multicultural Britain' and 'the beauty of a diverse and ever-changing UK'--I want to fucking vomit. I mean, Britain’s another culture different from mine. Why can’t I celebrate and strive to preserve British culture? Why do you get to pick which cultures get ridiculed and which cultures get special hands-off treatment? Why can’t I raise awareness about the ongoing compromise of British national identity under the handshake of global economics and global utopianism? Why can’t that be MY good deed?”

He adjusted his epaulets and clicked his Wellingtons.

He knelt and kissed her hand.

And she did. And there it was. Suddenly, a flash of moral clarity. They had a connection.

They made love all night long. . .

And love reigned o'er all again. And there was faith and courage once more. And the past and the present were no longer shamed and reviled and a beautiful future. . .a new Renaissance. . .a rebirth of basic freedoms. . .an awareness of the stars in the heavens and not on the screens. . .was erected in place of a rotted urbanity strewn with body parts and devalued standards, a hypothetical future devoid of beauty, romance and chivalrous love built on the crumbling utopian foundation of good intentions. There was knighthood once more. King Arthur would have been proud.

And so would Winston.

Let her sun never set.
Posted by Will Franken at 12:18 PM