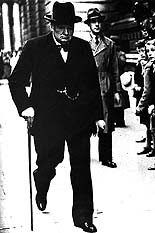 This is the picture that adorns the cover of the hardback version of the second volume of William Manchester's biography of Winston Churchill--The Last Lion.

The 'Alone' portion of that subtitle means a good deal to me at this particular point in my life. I picked this book up again a few days ago after a long hiatus. When last I had left it, Churchill was about to make what many consider his gravest political blunder by standing with Edward VIII during the abdication crisis of 1936.

Earlier this year, I had finished the first volume, "Visions Of Glory: 1874-1932" and plunged straightaway into the second with no less enthusiasm. It's very revealing that the second volume is nearly as long as the first yet encompasses only eight years. But what an eight years they were. . .

Churchill was one of the greatest men that ever lived.

I was waiting for a bus in the upper Haight this afternoon, reading (and feeling) "Alone", when a man walked past the bench where I was sitting and, out of the corner of my eye, I saw him stop and cock his head sideways to get a look at the cover. At the time, I wasn't really in the mood to be disturbed. I've been a little emotionally fragile lately. Not quite Churchillian to be "emotionally fragile", I suppose, but then again, I am in California. Soon I notice him leave and I look up to follow his departure.

Then he turns around. One of those graying baby boomers that the Chronicle is celebrating in their "Summer of Love: 40 Years Later" series this week. The guy strolls up: "Hey, who wrote that Churchill book you're reading?"

The guy smiles. He's got on an orange fleece and khakis, clothes that people who smile a lot wear. You know, the kind of people who believe in rainbows. So he says, "Manchester. Didn't he write a book on the Kennedys?"

But I humor him anyway. I flip to the "Books by William Manchester" page at the beginning. "Well, let's see," The guy sits down, still smiling. "Yeah, it looks like he did one called 'Portrait of a President: John F. Kennedy in Profile'".

Then he says, "You know, Churchill was a reactionary."

I offer this instead, "Well, he thrived in opposition. That's when his star shone the brightest. He was known for being in the opposition."

I'm interrupted, "He wasn't ALWAYS in the opposition." Things are getting creepy now. At this point, I'm starting to get that postmodern San Francisco vibe. He continues, "Yeah, he was in the opposition with World War II, sure--"

Well, at least he's aware of that important fact. But then, right before I breathe a sigh of relief knowing that he's at least heard of World War II, he drops the mask and lets me have it.

"You know," he says conspiratorily, "Churchill was a right-winger."

My heart pounds, my blood boils.

He continues, "It's true. He was into that whole colonialism thing."

That's it. "Listen, you asshole," I begin, "this man singlehandedly saved Western Civilization, which, despite all the slander, is still something far, far superior to you or I. Now get the fuck out of my face."

He does. He no longer has anything to fight for. He's said his piece. And I've said mine. I am not in the mood for bullshit anymore. Three years ago, I was naive. I would have tried reasoning with him. But I am exhausted. And the bullshit today is the thickest it's ever been. I can no longer take it.

When a stranger comes up and harrasses you for what's on the cover of a book you're reading and plays a little game of "look how quickly I can emasculate a real-life historical hero into a neutered tidbit of morally relativistic small talk", there just simply isn't room for kindness anymore.

He does get the last word in, however, as he's rounding the corner: "Fascist!"

Meet the new stormtroopers.
Posted by Will Franken at 11:19 PM